The parent company Swedencare AB (publ) is responsible for the strategy, business planning and management. This is done by the control of trademarks and patents, sales rights, cooperation agreements and as parent company of the subsidiaries. The Company and headquarter is located at Medeon Science Park in Malmö, Sweden.

Swedencare owns 100% of the shares to all subsidiaries/sales companies which are responsible for the sales and marketing for its individual regions. The subsidiaries provide a monthly financial report as well as a sales progress to Swedencare. The group also have a common ERP-system where orders and invoices are registered. The system enables an effective production planning at the same time as the subsidiaries can track the order progress. Through the local market knowledge of the subsidiaries, the marketing can be customized and the local customer preferences and new products can easily and effectively be identified. The subsidiaries are located and managed in Greece, Spain, France, Great Britain, Ireland, Sweden the US, and Italy. 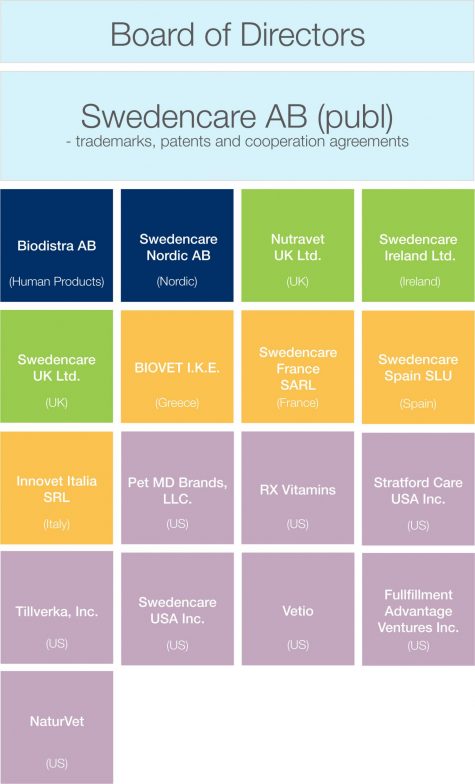 The Board of Directors are responsible for the Company’s strategic and financial targets and, together with the management, for the strategic planning. In the BoD, there is an extensive experience of international sales and marketing as well as a wide international network. The Managing Director and CFO are responsible to provide a business plan in line with the BoDs strategic and financial targets. They are also responsible for financial planning, and questions and communication with the stock exchange. The CEO of the Company, together with the managing directors of the subsidiaries, is a management team responsible for product development as well as sales and marketing.

* Own or related holdings of shares and other financial instruments in Swedencare. Holdings include related parties per 2022-03-31.

The registered head office of the company is in the municipality of Malmö.

3. OBJECTS OF THE COMPANY

The company objective is, directly or indirectly, the development, manufacture and sale of products within the area of animal healthcare and preventive dental care and other business compatible therewith.

The company’s financial year shall be calendar year.

For audit of the company’s annual report, the accounts and the administration of the board of directors and managing director, not less than one auditor and not more than two auditors with or without deputy auditors shall be elected.

The following matters shall be addressed at the annual general meeting:

Notice to attend a general meeting shall be advertised in Post- och Inrikes Tidningar (The Official Swedish Gazette) and on the company website. At the time of notice, information about the notice shall be advertised in Dagens Industri. The notice shall immediately, and at no cost for the recipient, be sent by post to those shareholders who so request and state their address

The company’s shares shall be registered in a CSD (central securities depository) register in accordance with the Financial Instruments (Accounts) Act (1998:1479).

13. COLLECTION OF PROXIES AND POSTAL VOTES

The board of directors may collect proxies in accordance with the procedure specified in Chapter 7, Section 4, second paragraph, of the Swedish Companies Act.

Articles of Association adopted at the general meeting held on April 29, 2021

The auditor reviews the company’s annual report, interim report for the third quarter, and accounting, as well as the Board’s and the CEO’s administration.

Manage Cookie Consent
We use cookies only to improve your experience. By clicking ”Accept All Cookies”, we can continue to improve the content delivered to you.
If you want to learn more, visit our Privacy Policy page anytime.
Manage options Manage services Manage vendors Read more about these purposes
Preferences
{title} {title} {title}